Biking to the Fishing Village

View My Exploration of Vietnam on Khandilee's travel map.

Today Kim, Mike and I moved to a different hotel in order to be closer to a beach that they can launch the kites from. Still no wind for them :o(

We took a great bike-ride today north to the fishing village. I'm not sure how far it actually is but I think Mike said that it's something like 6km ? The bikes are old and rickety but all three made it to the village and back without any issues. The traffic is a bit perilous at times, with the big buses and the multitude of moto-bikes, and an occasional cow, chicken, or goat. I just kept straight ahead trying to convince myself that 'they will see me and go around....I'm sure they see me and will go around...yes, they see me and will go around' yep, it went something like that in my mind. So...happy to report no fatalities, although I felt that there were a couple of close calls.

The weather again, was overcast and we got a little wet on the way back. It was a great work-out and I even got a little sun despite the clouds. My backside is a little sore from the rock-hard seats but overall, not in too bad shape. We stopped along the way for an iced coffee and a bite of lunch. Spring rolls for Mike and me and noodle soup for Kim. Yummy....

I have been craving a bit of chocolate but have been told that the chocolate here has some sort of additive to keep it from melting so it reportedly has an off taste and I guess I would rather have no chocolate than bad chocolate.

We took a great video today of our bike-ride. Mike mounted the camera to the handlebars of Kim's bike. It's a little wobbly but overall it's a very good representation of what the local area looks like. I will try to get it posted somehow soon, but I'm not sure when or how. If you look closely, I think you will see a bit of sweeping and sitting going on!

The fishing village really didn't amount to much other than the landing point was pretty cool with all the boats docked. I suppose that we should have gone in the early morning in order to see all the fishermen off-load the daily catch. 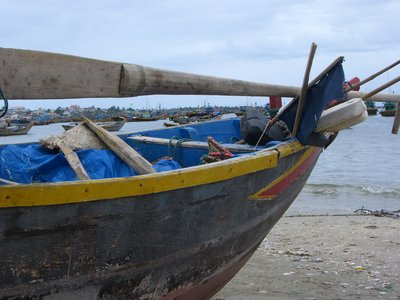 We walked down to the waters edge at the landing point and were met by 5 young girls selling stuff. I broke down and purchased some post cards for about $2 usd. The girls were ages 14-15 and they all looked so much younger than that. It's hard to tell the age of the locals here, they all look so much younger than they are. If I had to guess, I would have thought them to be around 8-9 instead of Trinity's age. I did manage to snap a couple of pictures. I find the young to be very pretty and the older women very 'worn' looking.

It's raining this afternoon, so we are resting inside and I am currently watching Harry Potter on HBO. whooo hoooo

Tomorrow, I am going to try to figure out the bus for Dalat and hopefully book a place to stay. Still working out all the details of my trip but hopefully it will go smoothly. I am a little hesitant to leave here with the security of Mike and Kim but I need to press on if I am going to see anything other than the beach.

(I am going to try to keep up with the cost more for myself than anything. Ignore it if you want)

Posted by Khandilee 07:56 Archived in Vietnam