My experience with the Vietnam Open Bus Tour

0 °F
View My Exploration of Vietnam on Khandilee's travel map.

Dalat....I'm finally here!! For anyone thinking about taking the bus from Mui Ne to Dalat, I would caution you to find alternate options. I found the bus to be miserable. First, I expected a much larger bus and was herded into a 24 seater which was about the size of the 'short bus' at home that carries the handicaped children to school. It would have been much more fitting for about 12 people instead of 24. And of course, it was full! 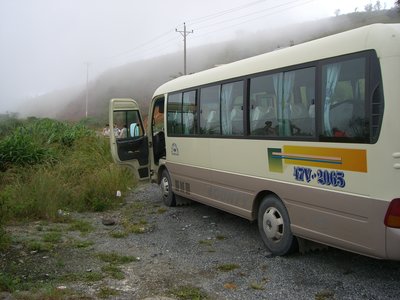 I'm quickly herded onto the bus with an empty seat beside me, thinking this must be my good karma, because the seat in front of me is so close that my knees barely fit. Next stop....my empty seat is taken, d#%n!

The girl that sat beside me was very nice, Lee (I'm sure I am butchering the spelling) from Singapore. She is on holiday for 17 days to travel to Halong. We shared some conversation before it got to loud to continue.

The Vietnamese man in the seat in front of me apparently thought that his comfort was paramount to anyone else's.. His window was wide open the entire way and although a little cool air would have been nice, by the end of the trip I felt like I had ridden 5 hours in the jeep from the day before, my hair slapping my face the entire way. Then just to make matters worse (remember my knees are tight against the seat in front of me), he decides to lie his seat all the way back. So suddenly out of nowhere....his head is slammed into my lap without warning! Now maybe it would be nice to have a mans head in my lap but come on!! This was ridiculous.... I managed this for about 10 seconds....took a deep breath so as not to say anything horribly not lady-like and tapped his shoulder and politely told him to remove his face from my chest!! He kindly obliged....with a horrible grimace my way.

The road to Dalat is not a smooth one. Between dodging huge holes in the road and the ox-carts carrying everything you can imagine, most of the trip was taken at about 10mph (or so it seemed). Except of course when we finally got into the mountains with no guard-rails then the speed seemed to increase as quickly as the elevation. Most of the time it was better to pretend to be asleep than to watch the passing scenery or the cliff that I was sure we were going to tumble down or send some unsuspecting moto-bike down as we took the hairpin turns on the WRONG side of the road!

There were a couple of stops along the way but I was careful not to wander far from the bus due to yesterday's display on the streets of Mui Ne. As we were having breakfast (lunch for me), some girl suddenly ran screaming at the top of her lungs chasing after a bus. We were certain that the bus had ran over a friend/companion of hers and she was hysterical. Come to find out it was her luggage. Somehow, the bus left her with her luggage still on board.

As we arrived in Dalat, I had planned to taxi to another hotel than the one that the bus dropped us at but I was way too tired to deal with finding a taxi and hoping that another hotel had vacancy. So here I am at a shit-hole guesthouse, The Trung Cang Hotel. Actually, it isn't really too bad. I have a double room that is HUGE, clean, with two beds, hot water (real hot water...the shower was wonderful), cable TV, mini-fridge and a window that wont close. Breakfast is free and there is wi-fi in my room! All for a mere $7/night!

So by this time, I am starving. Having only eaten a few grapes on the ride here (for fear that motion sickness would set in if there were anything on my stomach). I basically dropped my bags and tried to head out of the hotel. I checked in at the desk to drop my passport and let them know that I would only be staying one night The clerk at the desk brought out a tour paper and wanted to give me his sales speech....I quickly informed him that I was headed out to find something to eat and I would think about tours later. He did not appear happy but I didn't give him any other option.

Leaving the hotel, I attempted to find the town center and the market. Certain that there would be food to be found. True to form, I headed the complete wrong way!! I quickly figured out that I was not in the right place and turned myself the right way. Soon, I was approached by the well-known Easy Riders!

Already knowing that I plan to do the Easy Rider trip, I told him that I needed to eat and then I would talk with him. He directed me to a place in the market and I had a fabulous lunch/dinner. After, we discussed the options for my Easy Rider trip.

I have booked 7 days from Dalat to Hoi An (hopefully off of the tourist trial) at a price I am not planning to share. I have read many things about the Easy Rider trips and hope that I am as happy with my trip as others have been in the past. My itinerary travels through several small villages (with an optional home-stay) and includes Lak Lake, Buon Ma Thout, Pleiku, the old DMZ, Phouc Son and several others taking the scenic route to Hoi An. I'm very excited about the trip. We are leaving tomorrow morning after breakfast. We will tour around Dalat a little more (took a couple hours today) before leaving town for our journey. My driver is Stephane and he speaks fluent english, french and vietnamese. I rode around town today with him for a couple of hours and he seems a very capable driver. He states that he has been doing Easy Rider tours for 16 years....

Today, we toured the Truc Lam (Bamboo Forest) Zen Monastery, walked along the shore of the Tuyen Lam Lake (paradise lake according to my guide), and indulged in a tram ride (which was a little scary and I'm not fearful of heights). I was happy that he dropped me at most places and allowed me to explore for some time alone. He then joined me and explained some of the history/stories about the places that I saw. The Monastery was beautiful and actually a working Monastery. There is a huge bell in the garden and reportedly, it rings only at New Year. (something about placing family names on paper slips inside the bell for good luck or something like that...I really need to pay more attention). After, we shared a coffee at a pleasant coffee shop near the market and I am now relaxing at my hotel. 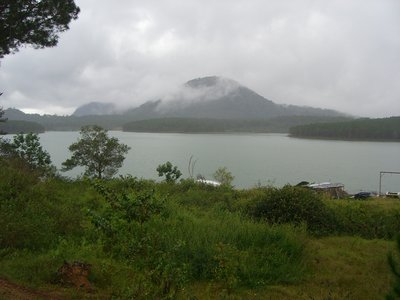 Planning to make it an early night, I am comfortable in my pj's here at the hotel. My body aches from the bike-riding, bus-jostling, and climate changes. It's nearly cold here at 67 degrees!

It would seem that there are more people reading my blog than are subscribed. I would love to hear from those of you reading...please leave your comments!!

Posted by Khandilee 06:56 Archived in Vietnam

oh dear! sounds like you've got yourself sorted though....what happened to the sleeper bus???? Enjoy the trip and keep us posted when you can!

Wow, sounds like quite the trip! If you plan to come back here to Mui Ne, I would complain to the company where you booked the sleeper bus...looks like it WAS NOT the sleeper! Lame. So glad you found a reliable Easy Rider - that is gonna be quite a ride...enjoy!
xoxo Kim

I guess the only sleeper bus is from Mui Ne to Dalat and Dalat to Nha Trang are 'soft seat' and the rest are sleepers. Not sorry that I am going to miss the bus from here to Hanoi!!