Day 2 we traveled from Lak to Buon Ma Thout. It was a short distance but we were still on the road for most of 8 hours.

The first part of the day was spent touring through the villages and seeing the coffee plantations. I was in heaven! If I haven't mentioned it already....I LOVE the coffee here. "milk coffee" please! Mike and Kim and I even tried our hand at making our own but alas....it isn't quite the same! 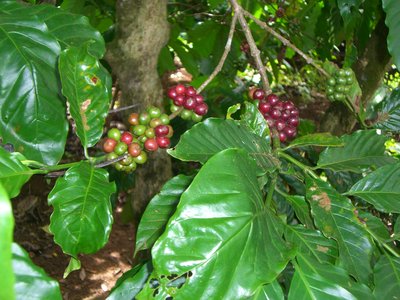 I made Stephane stop along the road so that I could take a few pictures of the rice fields and I stopped a lovely lady from her work for a couple of shots. She just kept smiling and after I was finished she went straight back to her work.

Took a quick stop to watch them make sugar candy. Again, the workers were all smiles and went straight back to work after they took a peek at the pictures I took. There were thousands of bees milling about. Unfortunatly, the pictures don't really show them. I managed to leave unscathed!

Went for a short hike to two different waterfalls. Dray Sap and Gia Long. There were HUGE spiders everywhere! I tried to capture a few of them on film but it's difficult to show how large they are. I swear that they were as big as my hand! I enjoyed Dray Sap the best of the two. I even got to cross a suspension bridge....a little scary! It sways and moves with every step and dont even think about looking at the construction or the boards that your walking on. There is no way that they would ever let people on this thing in the US! I just tried not to think about plunging into the churning waters below, held my breath and went for it. 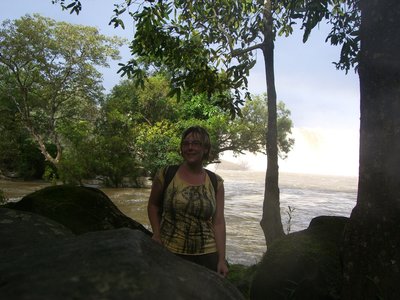 Stopped in at a small farm and got to see how they grow mushrooms. It seems that everyone has several things that they grow here. For most, it's coffee and a second job/crop ie mushrooms, silk worms, peppers (will go into that on day 3), sugar making, basket weaving, etc. It really makes me stop and think about the traditional skills that we are quickly losing in America. It's almost a shame that things have become so commercialized and most of us would starve if the microwave quit working!

The further away from the tourist track I go, the more I feel like an attraction to the locals. They are all very friendly and want to try to talk to me (we do pretty well with sign language and of course, it helps that I have Stephane with me to translate). They all ask about my children, which makes me miss them even more. I wish that I had brought some photos to show. Everyone likes to have their picture taken and see it on my camera. No one out here has cameras...except the occasional cell phone camera.

Posted by Khandilee 10:48 Archived in Vietnam

That picture of you looks so beautiful! Sounds like an amazing journey...the people here really are incredible, I think...all their diligence, resilience and hard work...and SMILES! Enjoy!